Halloween is the absolute best holiday around.  What’s not to love about costumes, candy, and spooky stories? Nothing, that’s what.

My birthday is actually ON Halloween, so I have a very special affection for October 31st.  For many years, that meant that I had a costume party with all of my little friends and we would trick-or-treat until what seemed like midnight.  The next couple of decades were celebrated similarly, but add in some drinks and debauchery.

The down side to a Halloween birthday is that once I had my daughter, it became all about her and I’m (pretty) ok with that.  I still love the holiday and we watch “spooky” movies throughout the month of October.  My daughter is NOT into the scary stuff, so I have had to find the most kid-friendly Halloween movies around to share with her.

If you live in the United States, you are guaranteed that it will be shown on tv a few times during the month of October.  As far as I’m concerned, this was Charlie Brown’s best work.  It’s cute, it’s sweet- absolutely nothing scary about this one, but it’s a great family movie.

Most of the Disney characters make an appearance in this 70-minute film.  While Mickey Mouse shares Halloween short stories with a theater full of friends, the Disney villains, including Jafar, Captain Hook, Cruella Deville and Ursula plot to ruin his night and take over the event.  It’s Disney, though, so you know that Mickey will always win out in the end.  House of Villains is great because it consists of several short animations, so even those with the shortest attention spans can enjoy.

You can’t miss with the story of Mike Wazowski and Sulley.  While this is not necessarily Halloween themed, I think monsters running a scream factory allows for a pardon in the category.  While the monsters are indeed intentionally trying to scare the screams out of children, there is enough humor and adorability to tip the scales toward kid-friendly. And it’s Pixar, so you know it’s good.

It is by far one of the most gorgeously animated films in existence.  Parents will love the Day of the Dead themed scenery and kids will love the funny skeletons and sweet love story.

This movie was released in 1949 and is the good old-fashioned classic Disney animation.  Really two short films based on the stories, “Wind in the Willows” and “The Legend of Sleepy Hollow”, it deserves a revisit.  Narrated by Bing Crosby- BING CROSBY, people. He even sings.  This is the good stuff. 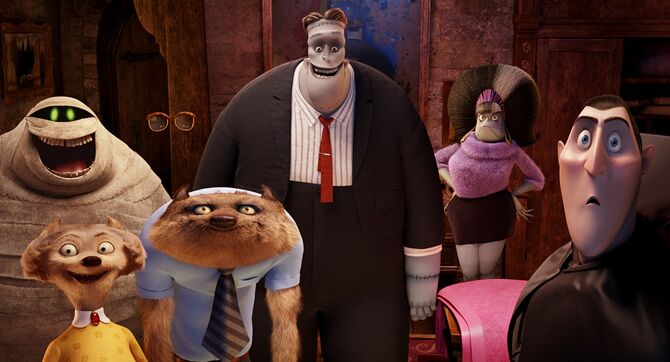 In a hotel full of monsters, vampires, and skeletons hiding from all of the “mean humans” in the world, this movie is full of laughs and fun.  Parents can play “name that comedian’s voice” (there are quite a few in there) and kids can watch as a bunch of monsters try to plan a birthday party.  Plus, there is a sequel in theaters now.

Similar in look and feel because they were both created by Henry Selick (often wrongly attributed to Tim Burton).  Visually, both movies are sort of dark and creepy, but lovely.  In Nightmare, the main character is Jack Skellington and hails from Halloween Town. This one is so good it should be watched twice a year- once at Halloween and once again at Christmas.  Coraline, tells the story of a little girl who finds herself in an alternate world (think Alice in Wonderland) that seems just perfect at first. Parents will love these two as much as (if not more than) children.  [[Bonus movies- James and the Giant Peach. Another Selick masterpiece]]

Frankenweenie is the most appropriate for the youngest in the family, followed closely by Corpse Bride. These are both animated and creepy and beautiful.  That brings us to the first live action films of the list- two of my favorites.  Beetlejuice is a little scarier, so might be best for the older kids, but it’s funny and cool looking and so entertaining.  Edward Scissorhands is not scary, but maybe a little dark for the younger set with a PG-13 rating. If you haven’t watched it lately, you deserve to do it today- Johnny Depp, Winona Ryder, manicured shrubs, suburban perfection, even Vincent Price.

Kathy Najimy, Sarah Jessica, and Bette as hilariously evil witch sisters.  This is always a go-to. Speaking of go-to’s, this list would not be complete without the altogether ookie, Addam’s Family.  It doesn’t get any better than Anjelica Huston as Morticia and who didn’t want to be Wednesday when they grew up?

Many networks play this during the Christmas season, but I think Halloween is much more appropriate.  Amazing costumes, witches, and flying monkeys serve as a perfect backdrop to the holiday.  No movie will ever be as fantastic as this original classic, but if you are looking to shake it up, there have been some pretty good reboots and off-shoots, including the newer animated Legends of Oz that includes a whole village made of candy, and Oz, the Great and Powerful, which is visually stunning and tells the story from the Wizard and wicked witches’ points of view.  Return to Oz is also a very under-rated version that is absolutely worth a watch.

Honorable Mentions for those over 10: Ghostbusters, Willy Wonka & the Chocolate Factory, The Dark Crystal, Labyrinth, and Young Frankenstein

About Julia 2 Articles
Julia is a graphic designer and the mother of the coolest five year old around. Based in Orlando, you can find her at juliaelliot.com
Website

The Annual Punky Moms Spooky Halloween Swap Event Is On!

THIS is our Christmas. THIS is our favorite event of the year. The Annual Punky Moms Spooky Halloween Swap Event! Every year we tweak it and change it a bit because our community of Punky […]

Halloween is finally here! Time for all things spooky and scary! So what makes your skin crawl? Is it flesh eating zombies? Alien invasions? Blood thirsty werewolves? What about the dreaded Punk Rock Halloween playlist […]

Hearth And Crow Handcrafts The Most Beautiful Witchery Supplies

Started in early 2017 in New Orleans, Louisiana – Hannah, owner and creator of Hearth and Crow (and Admin over The Punky Mom Family and Witchy Moms group) wanted to share her amazing, Pagan, witchy […]